The Green revolution that began with a sausage 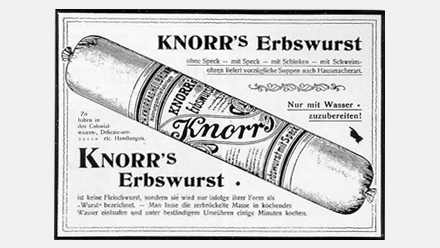 From the Brand Historian’s Timeline: 1889

Knorr was one of the first famous food brands that the Brand Historian worked on. It was in the early 1980s, when CPC International owned the brand.  I was working on innovation projects for its CMO, Anthony Garvey – clever, soft spoken and one of the most inspirational clients I have ever worked with. Tony was also a great champion of one of his products, Aromat which came in a plastic tube dressed in the familiar yellow, green and red house colours of Knorr.

Aromat is seen all over Europe, especially in restaurants where it remains one of the essential table condiments. On the label it says, at least in the UK, All-purpose Savoury Seasoning, and we might think of it as the Swiss Army Knife of culinary sprinklings. As his rookie strategic planner, Tony took me aside and explained how important this product was to the retailer, the hospitality industry, and to the end consumer; it was also supremely profitable to CPC and was thus my introduction to the value-creating magic of culinary ingredients.

Apart from being one of Unilever’s biggest food brands today, Knorr is also a superb example of how brand meaning can and should be evolved overtime to take account of social, technological and economic change.

The brand had its origins in the in the late 1830s in Germany, when Carl Heinrich Knorr opened a factory in Heilbronn in Baden – Württemberg, where he had moved to follow his love. Originally the firm he founded supplied ground chicory to the coffee industry; but in the second half of the 19th century, there was also tremendous interest and experimentation in the dehydration of vegetables and seasonings to extend their shelf life. In this new technology, Carl Heinrich saw the opportunity of evolving the scope of his business. Knorr’s first great gift to the world came in 1889 with the launch of his recipe for Erbswurst – a pea soup dry mix packed in a sausage-shaped roll that became a famous feature of the German Army’s Iron Rations. It also was the foundation of Knorr’s huge soup business in Europe. With its new mission in dried ingredients, Knorr followed up with its first sauce mix in 1908, and a bouillon cube in 1912.

After the end of the Second World War, Knorr was acquired by Corn Products in the USA, by which time it was one of Europe’s leading culinary brands; its success was due at least in part, because it reinforced rather than challenged local cooking habits. By the time Knorr joined the Unilever portfolio in 2000 for a whopping $24bn, it was one of the world’s top food brands renowned for its embrace of cuisine diversity and for highlighting its vital connection to chefs and chef know-how.

Today, Knorr is in the vanguard of Unilever’s green agenda, and its newly refreshed mission is about extending what it considers the limited range of foods people eat. With its products, recipes, tips and tricks, it aims to show consumers how we can all build a greener, sustainable future. Carl Heinrich would no doubt approve, and I just hope there’s still a place for Knorr Aromat to perk up that kale lasagne.

Music to enjoy with your Erbswurst out in the field: